Our specialist in international renewable energy cooperation, Jingkai Shi, reports on his trip to South Africa.

Jingkai Shi took part in a research trip to South Africa (Johannesburg and Cape Town) led by Jens Kerstan, Senator for the Environment, Energy, Climate, and Agriculture of the Free and Hanseatic City of Hamburg. The trip was part of the EU project, ‘International City Partnerships: Acting for Green and Inclusive Recovery’ (ICP-AGIR). The other members of the delegation were Brigitte Köhnlein, Authority for the Environment, Climate, Energy and Agribusiness (BUKEA), Hendrik Schurig, Hamburg Wasser, and Britta Peters, HiiCCE Hamburg Institute for Innovation, Climate Protection and Circular Economy GmbH.

The EU ICP-AGIR project is running from October 2021 until March 2023 with the aim of helping to improve quality of life in participating cities by promoting sustainable urban development and identifying innovative policies. A total of 28 cities from Asia, Europe, Canada and South Africa are taking part. Hamburg and Cape Town are already circular economy and energy transition partners.

In June 2022, representatives of the City of Cape Town and the GreenCape organisation had already visited sewage, renewable energy and waste management projects in Hamburg. The EEHH Cluster Agency coordinated visits to Stromnetz Hamburg, the Energy Bunker and the Energy Campus Technology Centre at the Hamburg University of Applied Sciences.

The research trip to South Africa began with a one-day seminar in Johannesburg. Senator Kerstan gave a presentation about the city of Hamburg and its vision of becoming an international location for innovation, sustainability and business. 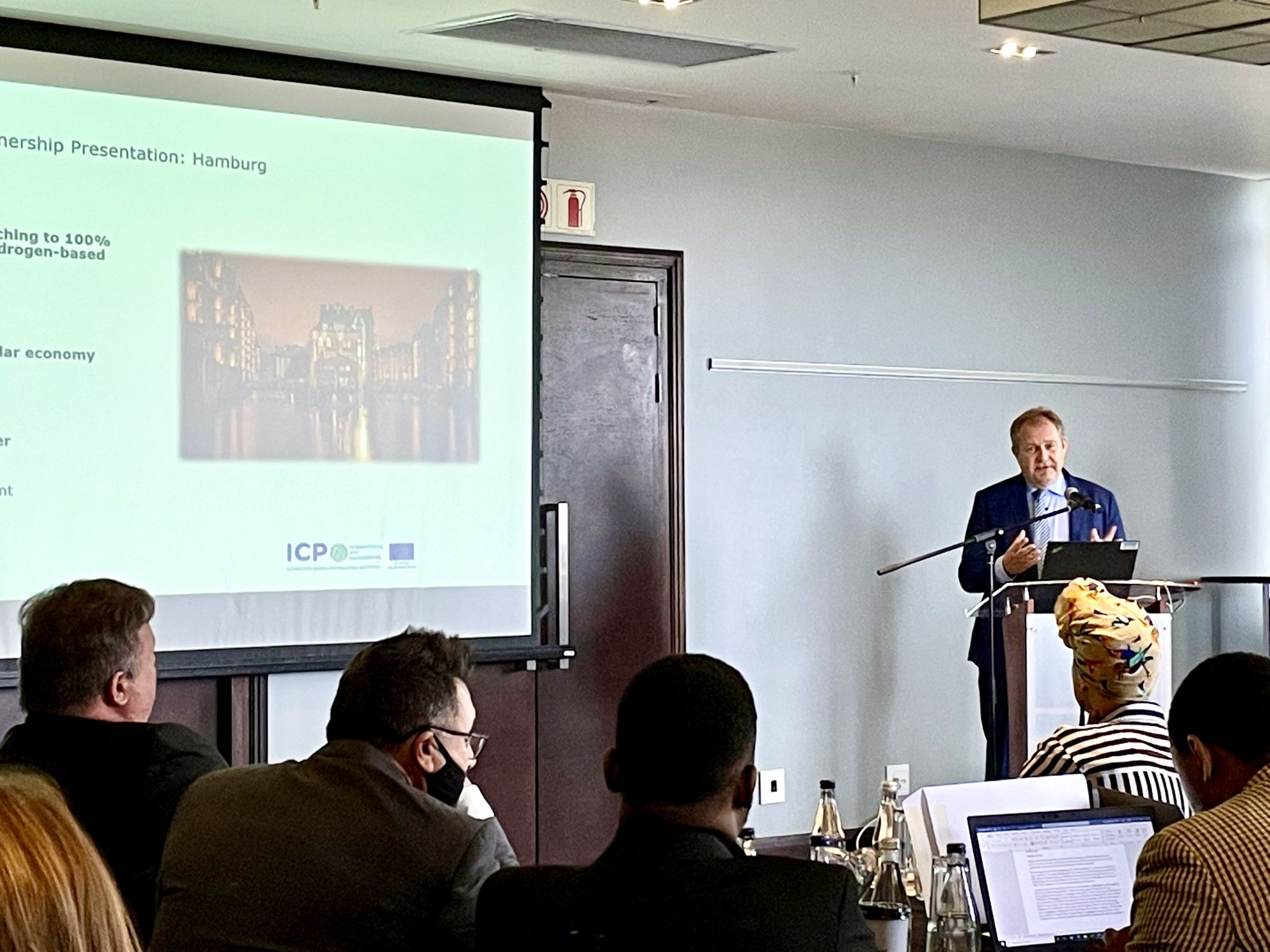 GreenCape then accompanied the Hamburg delegation during the subsequent days devoted to ‘Waste, Energy and Water’, which provided an extensive programme of visits. The GreenCape cluster organisation was founded in 2010 and brings together a network of around 2,000 companies, investors, intellectual institutions and public stakeholders with the aim of creating new investment and employment in order to transform the resilient green economy. Its focal points are the circular economy, renewable energies and water. 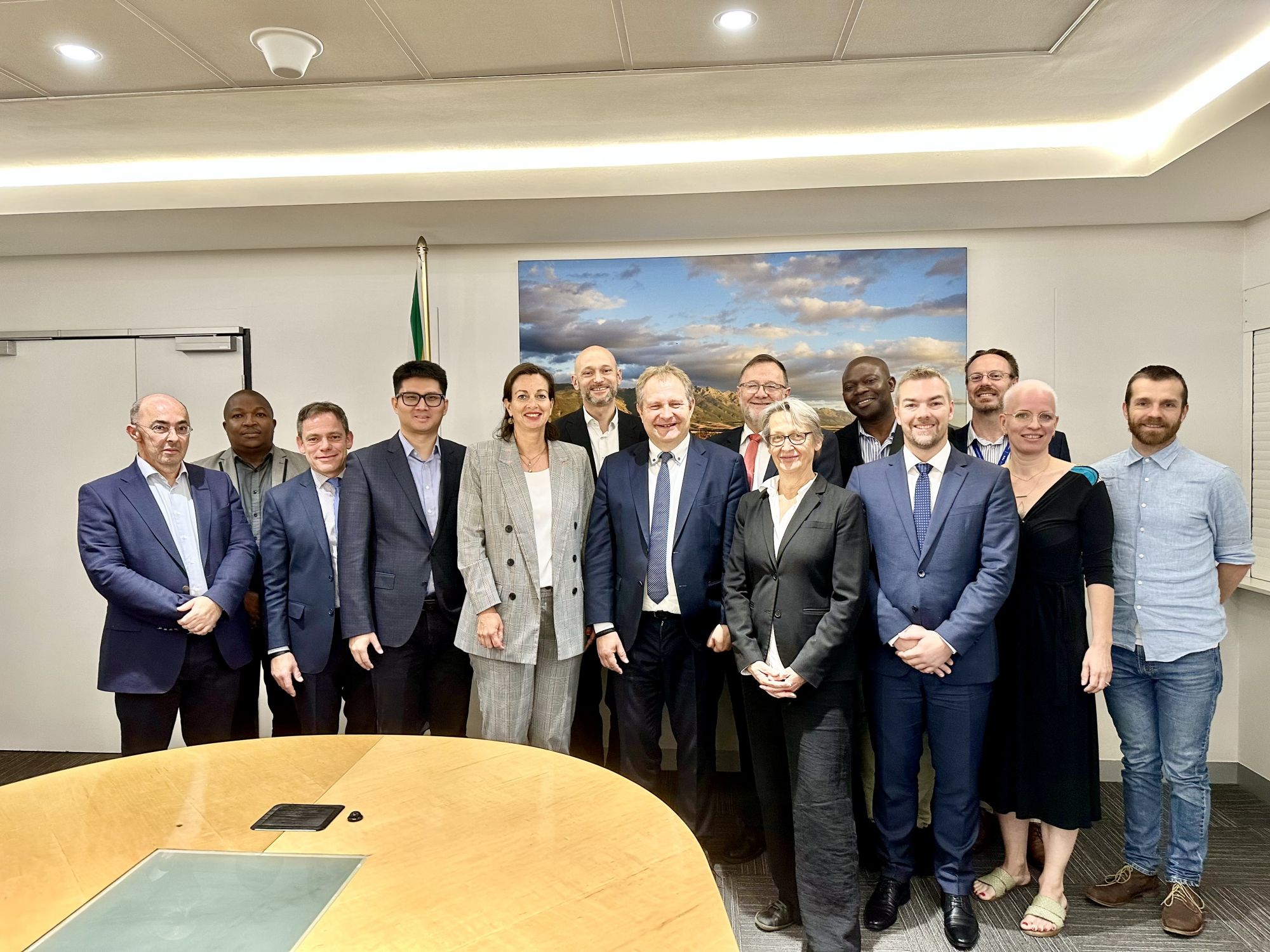 At the Energy Day, the City of Cape Town provided an insight into the regulations/framework conditions, pilot projects and future plans for securing the power supply and expanding renewable energies.

The South African Renewable Energy Technology Centre (SARETEC), the country’s first technology and training centre for renewable energies, was founded in 2015 with the support of German Corporation for International Cooperation GmbH (GIZ). SARETEC provides a varied programme of training courses and workshops for the entire renewable energy industry. 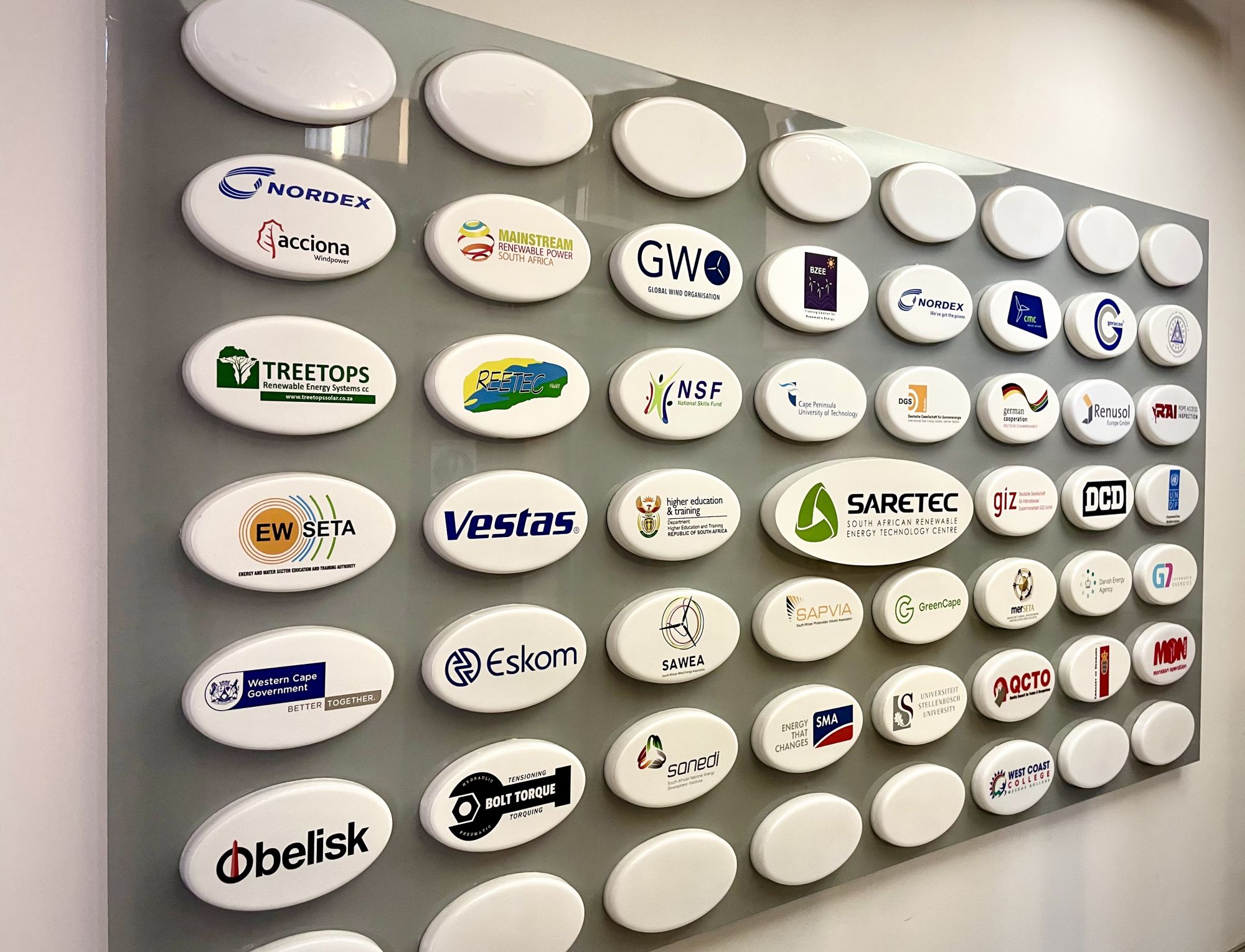 Power generation in South Africa is currently heavily dominated by coal, which accounts for almost 75% of the total energy mix (approx. 57 GW). Renewable energies, on the other hand, still only play a minor role, with 6.3 GW. 64 renewable energy projects have been implemented to date, including 22 wind farms that feed 3.7 GW of electricity into the grid.

The state-owned energy group, Eskom, operates almost all the coal-fired power stations, as well as the national grid, and supplies around 92% of all South Africa’s electricity. For years, however, the power supply has not been guaranteed, due to a lack of investment in the energy infrastructure and deficiencies in the national energy policy (corruption and a boycott of renewable energies). In order to avoid a nationwide blackout, decaying coal-fired power stations (average age 37 years, 30% near the end of their service life) and power grids require constant maintenance. As a result, there are frequent scheduled power outages, or load shedding, lasting up to seven hours a day.

The ongoing, serious energy crisis is forcing the South African government to rethink. As early as 2011, the ‘Renewable Energy Independent Power Producers Procurement Programme’ was introduced. The Integrated Resource Plan (IPR) outlines a roadmap for the green transformation and diversification of the energy supply in South Africa by 2030. Independent power producers are allowed to operate plants connected to the grid, but can only sell the power they generate to Eskom.

Thanks to the further liberalisation of the energy market in 2019, towns are now allowed to purchase electricity directly from IPPs. Cities such as Cape Town and Johannesburg are regarded as pioneers when it comes to renewable energies. In 2022, the City of Cape Town issued an ‘Embedded IPP Tender’ (for decentralised energy supply by private electricity producers) for up to 200 MW. The gradual expansion of renewable energies aims to minimise the negative effects of load shedding and secure the energy supply.

According to the IPP, South Africa will reach 75.74 GW of grid-connected electricity generation capacity by 2030. Renewable energy capacity will be increased to 20.4 GW (including 14.4 GW of wind power), approx. 26% of the total electricity production capacity.

Members of the EEHH network in South Africa

ENERTRAG has been active in the South African market since 2017, focusing on renewable energies and green hydrogen. ENERTRAG currently operates an onshore wind park with a capacity of 5.2 MW in South Africa. As a member of the HyshiFT Consortium, ENERTRAG intends to collaborate with Linde, Sasol and HYDREGEN Energy (Pty) Ltd to produce sustainable aviation fuel (PtL Kerosene) from green hydrogen. This HyshiFT Consortium project aims to produce 50,000 tons of aviation fuel per day – two flights a day between Germany and South Africa.

Thanks to the establishment of the ‘Hyphen Hydrogen Energy’ joint venture with Nicholas Holdings, ENERTRAG has also been awarded the contract to implement a project to produce green hydrogen in the Tsau-Khaeb National Park in Namibia.  It plans to invest USD 4.4 billion for the initial project phase (until 2026). This will be used to develop renewable energy plants with a capacity of 2 GW, as well as other facilities for seawater desalination and the production of green hydrogen and green ammonia. As this project progresses, the production capacity of the wind and solar farms will be increased to 5 GW, while 3 GW of electrolyser capacity will also be installed. The total investment will be approx. USD 9.4 billion.

Hamburg is the model region for the energy transition and the Germany’s wind capital with connections all over the world. The local renewable energy sector is thus a key partner for the international energy industry. In my role as a contact person for international cooperation in renewables, I’m responsible for REH’s relations with international industry networks, support REH’s members in their international activities, and help Hamburg gain a stronger visibility and perception on the world stage by using social media.