2022 is drawing to a close and a lot has happened at the EEHH. Following a strategic and HR restructure, we have held a large number of specialist events, trade shows and delegation visits. This article reports on the international highlights of EEHH.

The International Offshore Wind Partnering Forum, IPF for short, is the leading specialist conference for the offshore wind industry in North America. The offshore wind industry in the US has been reinvigorated ever since the Biden Administration gave the go-ahead for the expansion target of 30 GW by 2030. In 2022, EEHH was represented at the IPF in Atlantic City for the first time, together with GOI, the German-Offshore Wind Initiative and some EEHH member companies, including Carneades and Schmidbauer. 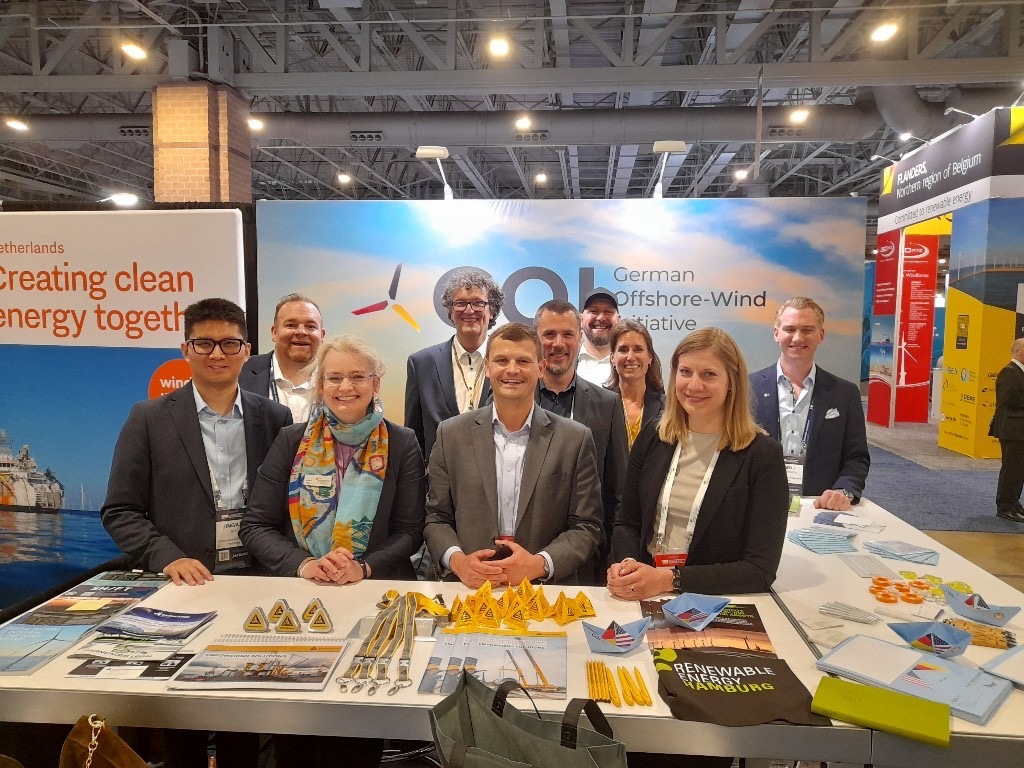 At the ‘Energy transition: lessons learned from Germany’ workshop, companies from Germany/Hamburg and the US shared their experience of regulatory framework conditions, market development and technology. The American attendees were particularly interested in using German technology and expertise to develop local value chains. We believe there are excellent market opportunities for EEHH member companies and would like to consolidate our position, as well as that of Hamburg.

Delegation visit to the US on the subject of hydrogen

As part of the US Department of State’s International Visitor Leadership Programme, a delegation visit took place in June on the subject of ‘US Hydrogen Sector and the Transformation to Renewable Energy’. The aim was to promote German-US exchange between political, business and scientific representatives on the subject of hydrogen. EEHH was also represented.

During meetings with Senate staff from individual US states, representatives of US hydrogen associations and well-known companies in Washington, DC, the delegation learned about the political framework conditions and economic prospects. Frequent changes in political leadership and difficulties in achieving consensus between parties were cited as particular problems. In order to make hydrogen viable and marketable, a number of funding programmes have been introduced in the US, such as the Federal Government Investment Bipartisan Infrastructure Law, which is providing USD 8 billion of start-up financing for four to eight hydrogen hubs. 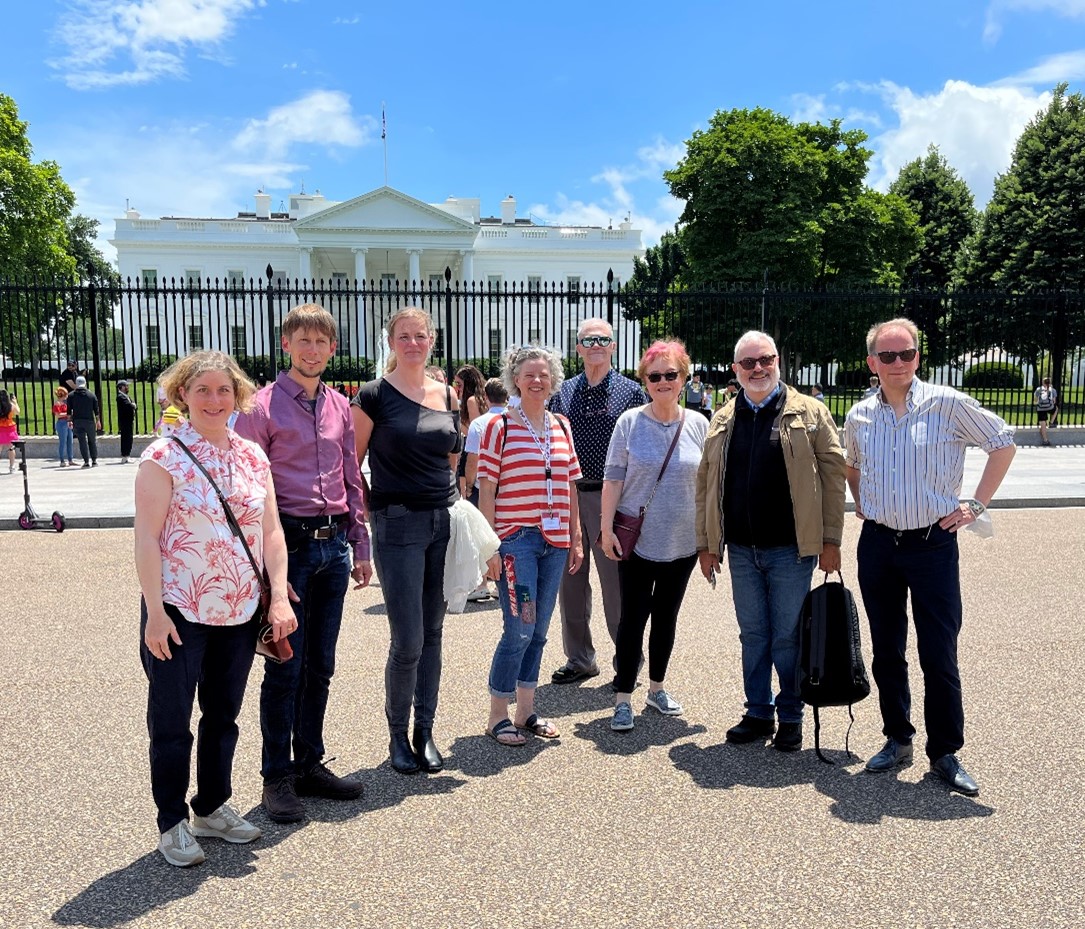 In California, the itinerary primarily included visits to various research projects, e.g. the H2 Station at the California State University of Los Angeles. When it began operating in 2014, the plant achieved a milestone for the commercialisation of hydrogen by being the first in the world to sell direct hydrogen fuel per kilogramme to private customers. The National Fuel Cell Research Centre at the University of California (UCI) is one of the principal research establishments. Its focal points include new applications for fuel cells, stationary and mobile systems, dynamic modelling and hybrid systems, as well as electro-chemical research and development.

Following a two-year break as a result of the coronavirus pandemic, the international wind industry gathered again in Hamburg. In total, around 56,000 visitors from 92 countries took part in the world’s leading trade show for the wind industry, along with 1,400 exhibitors from 37 countries.

At its two joint wind and hydrogen stands, EEHH welcomed delegates and visitors from various countries, including Japan, the US, France and Turkey. We invited international partner organisations and member companies to a networking reception, where we held discussions and presented Hamburg as a renewable energy competence centre. 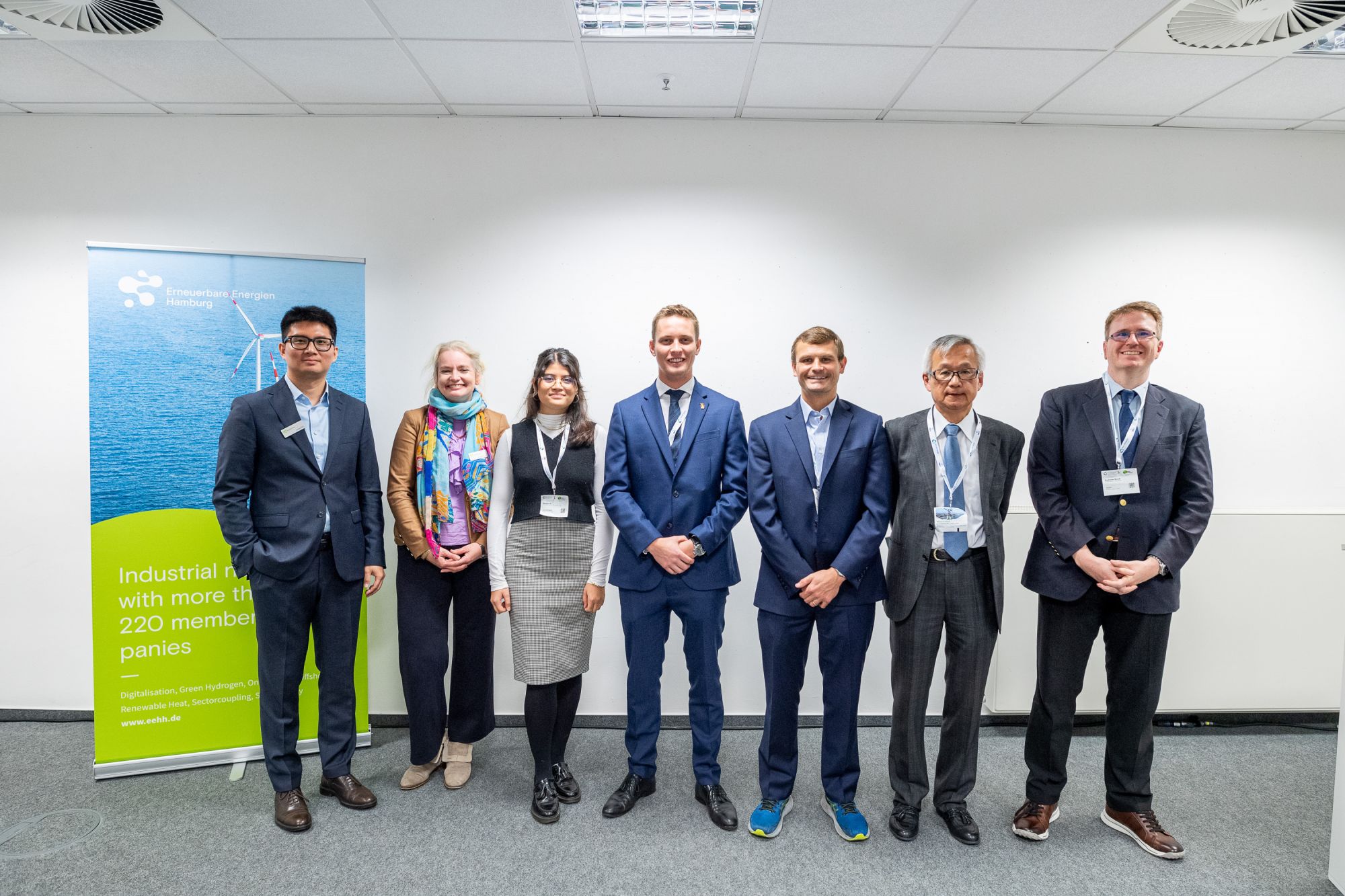 The third European Hydrogen Week took place in Brussels from 24 to 28 October, organised by Hydrogen Europe, the European Commission and the Clean Hydrogen Partnership. EEHH attended for the first time. In total, over 3,000 visitors, 120 exhibitors and 150 speakers took part.

The conference provided a comprehensive overview of many hydrogen-related topics along the entire hydrogen supply chain, from raw materials for PEM electrolysers, to storage in salt caverns, global cooperation and international competition. Participants were eager to discuss current political and legislative proposals. 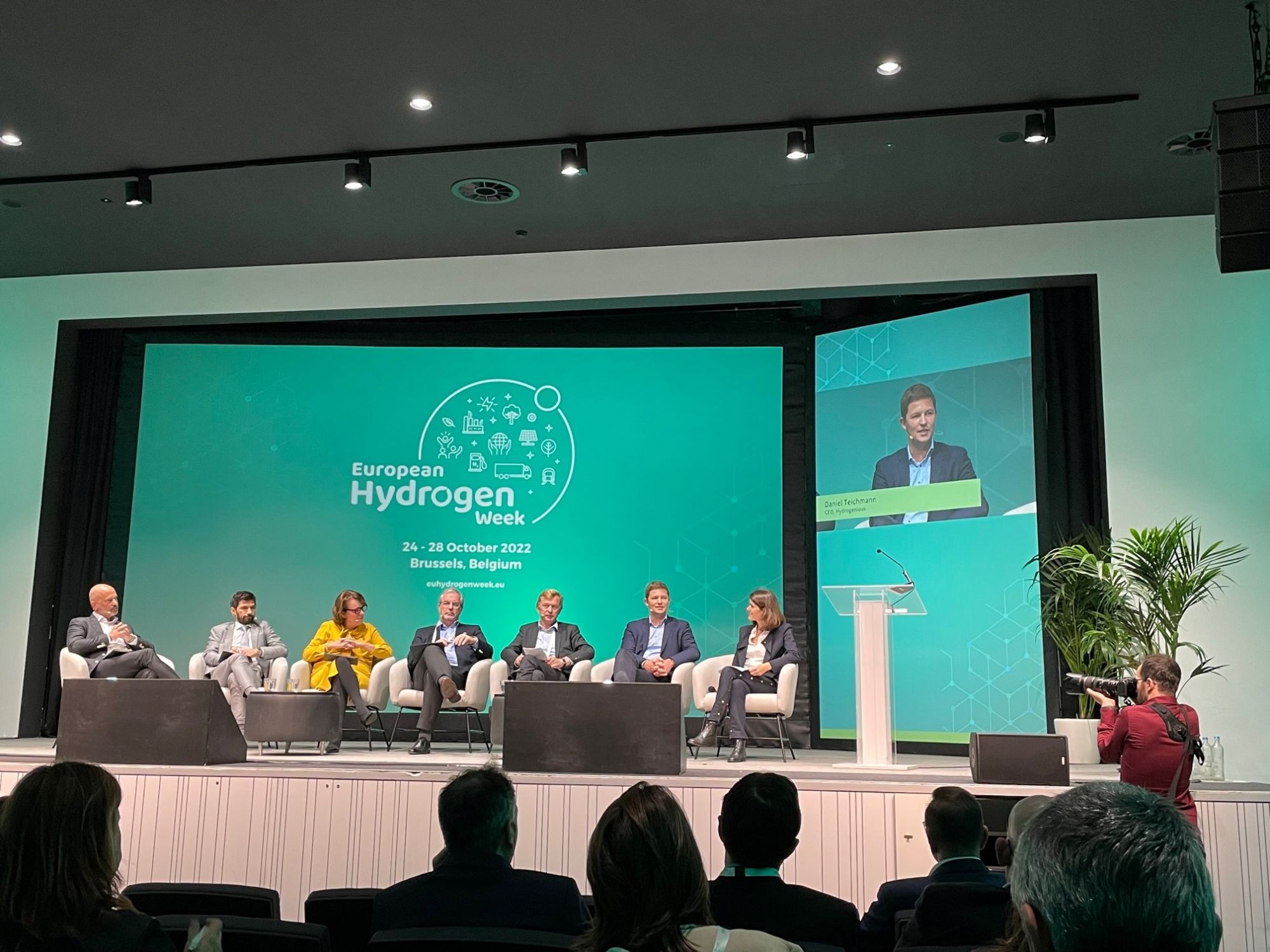 In terms of funding, EU Commissioner Frans Timmermans announced EUR 3 billion of financing in the form of grants for large-scale projects as part of the Innovation Fund Call in November 2022. The Hydrogen Academy will begin its work in the European Year of Skills 2023.

Expansion of cooperation with European partners

According to the latest EEHH member survey, Europe – and especially Scandinavia – is one of the principal geographic markets. As part of its internationalisation strategy, the EEHH Cluster Agency therefore places particular emphasis on consolidating and expanding cooperation with European partners for renewable energies and hydrogen.

At the first German-Norwegian Hydrogen Forum, EEHH and Innovation Norway signed a memorandum of understanding (MoU). The aim is to intensify cooperation on jointly relevant and interesting topics, as well as for the production, use and distribution of green hydrogen. The MoU is part of the major climate protection and energy transition cooperation agreement between Norway, Hamburg and four other northern German states. 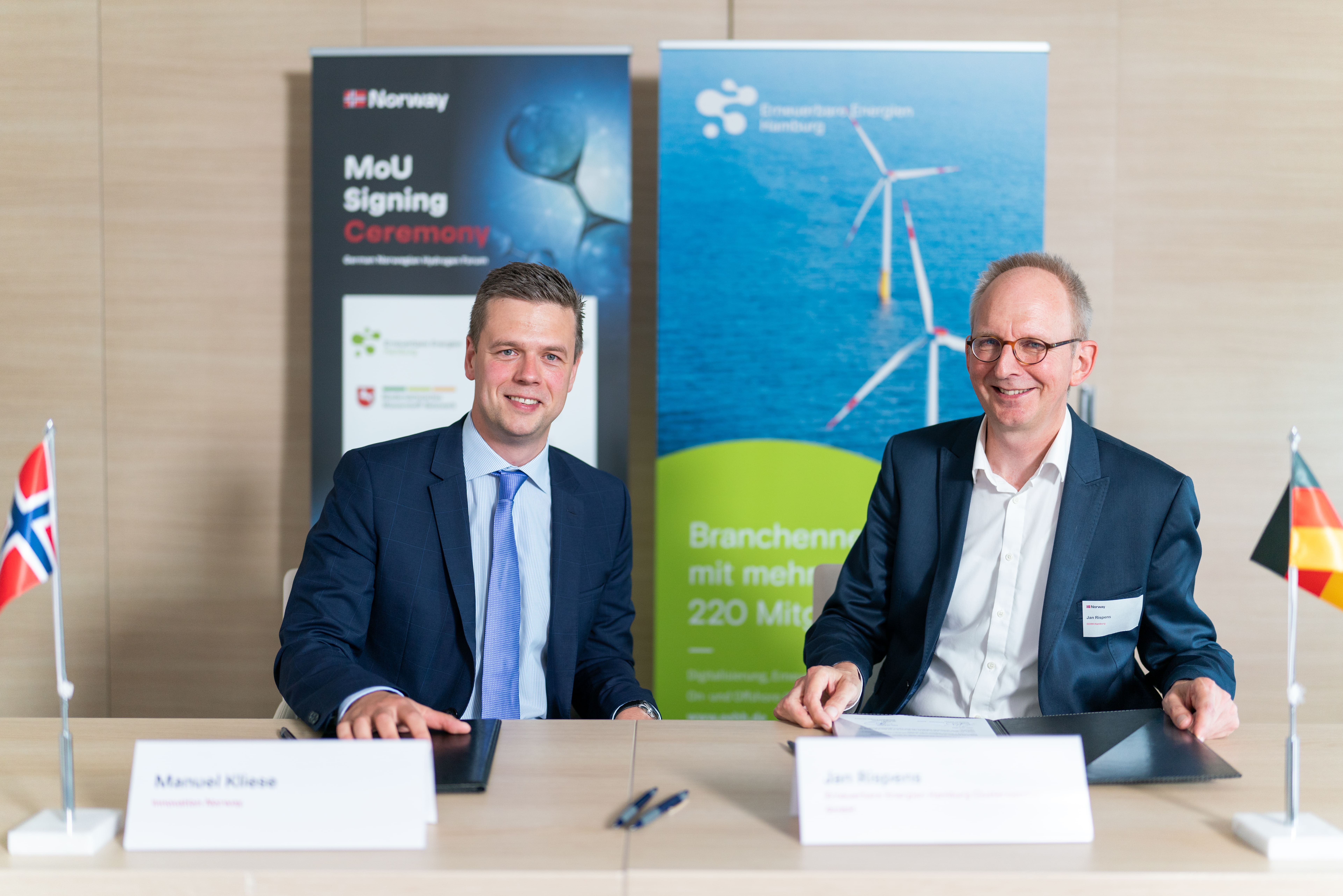 As the largest gas-producing country in western Europe, Norway plans to convert its existing gas pipelines and use carbon capture technology (CCT) to produce and export blue hydrogen. This will benefit Germany as an alternative climate-neutral energy source before it is fully supplied with green hydrogen.

During the summer, the heads of government from four countries bordering the North Sea (Germany, Denmark, the Netherlands and Belgium) met at the North Sea Summit in Esbjerg (Denmark) and issued the Esbjerg Declaration for closer collaboration for the expansion of offshore wind energy. This will turn the whole of the North Sea into a green power plant for Europe.

Against the background of the Esbjerg Declaration, six North Sea cluster organisations concluded a cooperation agreement. They aim to work more closely together in the areas of innovation, technological development and energy transition, in order to assist the EU with the implementation of ambitious expansion targets for renewable energies (offshore wind and hydrogen) in the North Sea. Specific measures include organising an international matchmaking event every year, involving member companies from all the participating cluster agencies. 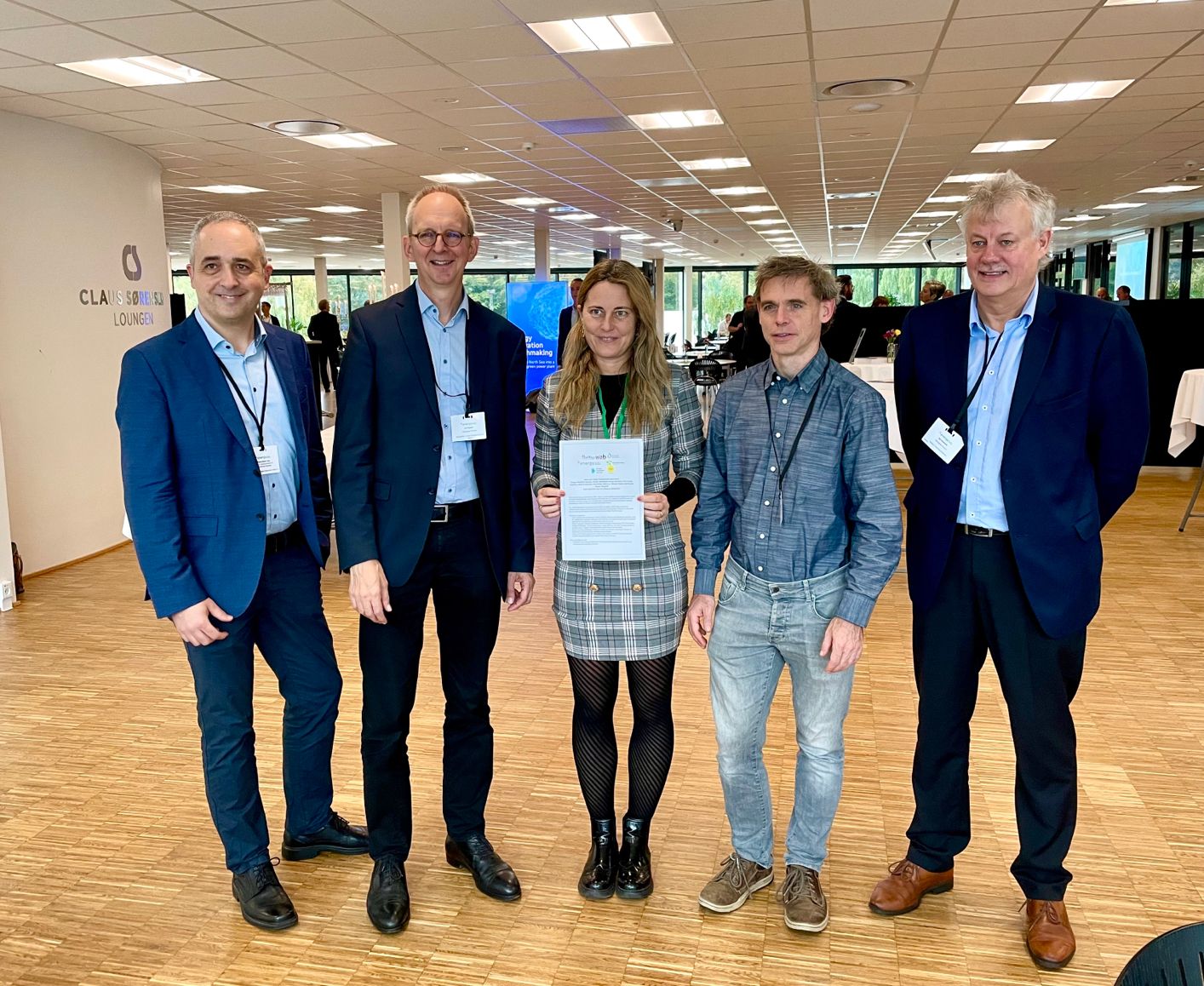 2023 is fast approaching. Here are the highlights for the first half of the year.

Please do not hesitate to contact us if you have any questions or are interested in a specific activity. We look forward to a successful 2023!

Hamburg is the model region for the energy transition and the Germany’s wind capital with connections all over the world. The local renewable energy sector is thus a key partner for the international energy industry. In my role as a contact person for international cooperation in renewables, I’m responsible for REH’s relations with international industry networks, support REH’s members in their international activities, and help Hamburg gain a stronger visibility and perception on the world stage by using social media.